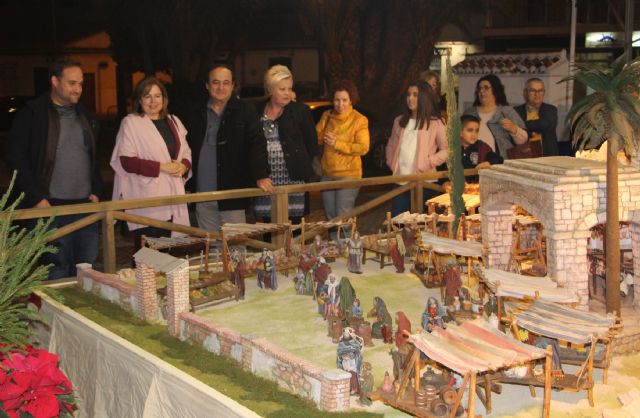 Luis Molina square hosted for the first time these events with which an extensive program of activities begins until January 7, 2019

At around 7:30 p.m. on Wednesday, December 6, San Pedro del Pinatar welcomed Christmas with the opening of the municipal crib, installed this year for the first time in the Plaza Luis Molina, in front of the City Hall, and the lighting of the Christmas lights in the urban center and main avenues of the town.

The act began with the performance of the young Sara Meciane, who sang a carol in front of the crib, later, the parish priest of the town, Roberto Burgos, delivered a prayer and blessed this installation in front of the scene of “The Nativity”.

Subsequently, the mayor, Visitación Martínez, members of the municipal Corporation, representatives of associations and neighbors made a tour of the nativity scene, accompanied by the manager of Belenes Horadada, a company that has been responsible for its installation for years.

This nativity scene, visited during Christmas by hundreds of people, recreates various biblical passages and the birth of Christ, costumbrista scenes of shepherds and peasants and allegories to emblematic buildings in the area.

In addition, the attendees were able to enjoy the new Christmas lighting of this Plaza Luis Molina, with four large reindeer in the central corridor that guide the visitor to the Bethlehem and the illuminated facade of the Town Hall.

A peaceful green oasis, playgrounds and a lake nearby, a good school, a shopping centre make this an ideal place for life, relaxation, recreation and socialisation.